I stayed in Livingstone Zambia in January 2018 to see the Victoria Falls and the Zambezi. I went to a shelter for wounded Cheetahs, with 90 km /hr the fastest land animal in the world. Some were rejected by their mother. In this place they were taken care of and when they were recovered they were released into nature again. According to a study from 2016, there would be approximately 7100 Cheetahs left in the wild. Their habitat is 9% of what it used to be. Good reasons for this shelter to take care of this endangered species. In the meantime, I was allowed to come in contact with them and even walk with them like we do at home with our dogs: on a leash. 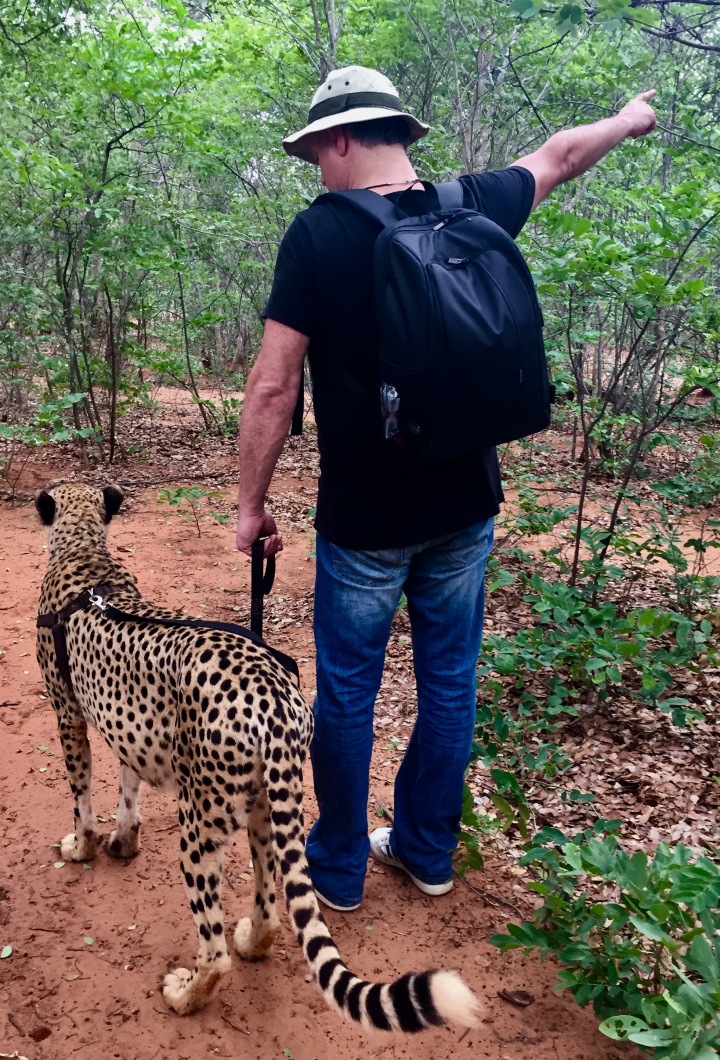 Cheetahs are fast, and they are good hunters, but not big fighters. Lions, hyenas and other predators often steal their kills.Cheetah families are also smaller than lion prides or hyena packs. Because of this, cheetah populations are falling in many areas.

They have a few juvenile Cheetahs that we got to spend over an hour with. We got to meet them, pet them, then take them for a long walk through the bush. All of it was hands on, all interactive. These animals all appeared to be very well taken care of.

If you’ve ever had a friend with unhappy cats, you know you can tell. But these fellas were so happy and pleased with human contact. I could not believe when I first walked up and they were lying on the ground and after a couple minutes of intro from the handler, they said we could pet them.

They started to purr. They purr like great big growly cats, and they obviously like attention. They were much bigger than I expected. They walked well on their harnesses, and would pull a bit too hard sometimes just like your dog when he is excited.

The expert guides were very friendly and then they basically just accompanied us on the walk and let us do all the working with the cheetahs. Did I mention how fantastic this whole experience was ? I just stood face to face with a real killer. An animal that with one stroke with its claws can end to your life. It was a very exciting experience that I will never forget.